Blog
You are here: Home / Blog / Uncategorized / Watch Out, Cardinals! 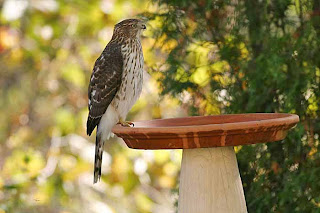 I often say that watching birds is much more entertaining than television. Today is no exception. This morning I spotted a bird on the ground and grabbed my binoculars. It was a Cooper’s Hawk! I had never seen one on the ground before. It flew on the trunk of a felled shrub nearby and looked around. Then it flew into a pear tree that edges our yard. Against my better judgement I grabbed my camera and stepped outside the front door. I knew they are pretty shy, but thought that I could approach our side porch to take a shot. When it spotted me, however, it flew off–much to the relief of the cardinal that was perched on the other side of the tree. The other day the hawk had better luck, since we found a large pile of feathers on the ground. Apparently, the hawk had snatched a mourning dove, which happens quite often. Hawks need to eat, too, but I would be sad if it caught a pretty singer such as a cardinal.
According to a book I bought recently, Cooper’s hawks feed mostly on birds and small mammals, hunting by stealth. They usually move from perch to perch in dense cover, then using a burst of speed to overtake prey. Their habitat are mature forests, open woodlands, and wood edges. Since there is a wooded ravine behind our house there is plenty of habitat to choose from.
Years ago I was more successful with my camera when I photographed an immature Cooper’s hawk at our bird bath. Yes, it really was just taking a drink. Back then, our garage door was already open and I used it as a cover. Many photographers also shoot from their cars, but I have never tried that. Perhaps I should, once the weather gets a bit warmer. The best advice, though, is to be ready all the time because you never know what unexpected visitors will pass through your yard.