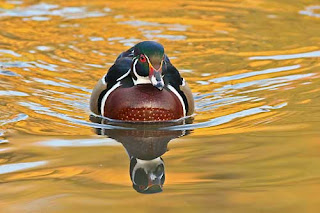 Waterfowl were not the only tame birds at North Chagrin Reservation. Here is a list of the birds I observed during my stay: Bluebirds, American Robins, Cooper’s Hawk, White-breasted Nuthatch, White-crowned Sparrow, Wood Ducks, Canada Geese, Mallards, American Wigeon, Red-winged Blackbirds, Black-capped Chickadees, Tufted Titmice, House Sparrows, and a Great Blue Heron.
It is one of life’s mysteries that a bird that I really could use in my portfolio only shows up when I don’t have a camera handy. Such was the case on Sunday when my husband joined me and I decided to leave the camera behind while we walked around the pond. Just then, a bluebird landed on a small tree not far from where we were standing. Considering how many people visited the reservation last weekend I was amazed how accustomed to humans all the birds were. Of course, humans weren’t the only creatures around. I haven’t seen so many dogs this side of the Allegheny Mountains. But wood ducks are truly the stars of the show and quite a few people asked me anxiously, “Are they still here?” Yes, they are – at least until early November or whenever they decide to fly south.