On a beautiful summer morning a couple of years ago I headed to North Park to photograph birds. On a tiny island in the lake a mulberry tree had fallen down, its berry-laden branches hanging over the water line. I soon spotted cedar waxwings eating the berries and flying off again. I was really proud of myself because I had caught one particular waxwing at the right moment.

After I downloaded the images to my computer I saw a problem in my shots: a fishing line was dangling right across my photo, thereby ruining it – or posing the daunting task of retouching much of the photo.

This was not the first time that I had seen a fishing line dangling from a tree. Such lines cause deadly hazards for birds as they get tangled up in them. Unfortunately, I did not see the line while I was photographing the birds – and didn’t carry a pair of scissors with me to cut it off – but I will pay more attention in the future.

Anglers, please collect your fishing lines before going home. The birds and other wildlife thank you for it.

When our yard was certified as a Wildlife Habitat I assumed that our house would remain almost free of animals, except for our two cats. Yet gradually, sneakily, animals have taken advantage of our good nature. First they took over our in-house garage. Mice nest behind or under our accumulated belongings. Birds such as wrens check out our supply of bird seed or simply spend the night in a cozy place. And let’s not forget the peanut shells that my car mechanic found in the engine room of my car years ago…

Next was the basement, where spiders and other critters hunkered down during winter. Marmorated stinkbugs have invaded pretty much the entire house, inside and out. I will never live down the day when I served beef stew and a stinkbug had landed on it…

Last week our cat Pocket spent all day in the basement even though it is colder than the upstairs. Late in the afternoon she was playing with a mouse in the dining room. We were not too alarmed – until we realized that it was a real mouse, not a toy!

What followed was a mad chase. The poor mouse escaped into the hallway and I managed to lock Pocket in the spare bedroom. I quickly closed the other doors and the mouse scurried into the tiny bathroom. Not wanting to catch a mouse with his bare hands, my husband fetched a pair of gloves. Unfortunately, they did not give him any dexterity and the creature escaped into our computer room. Meanwhile, I frantically searched for a trap in the garage. Imagine my surprise when hubby came downstairs with a mouse hanging onto his shirt sleeve! Maybe the mouse had gotten tired from being chased all day by Pocket and simply surrendered.

After the mouse was safely back in the garage I realized that I should have filmed the whole action!

Water is essential for birds at any time of year. Birds need it for drinking and bathing to keep those feathers clean.

It is even more crucial in winter, when ponds and streams are frozen or snow-covered.

If you want to provide water for your backyard visitors year-round, consider adding a birdbath heater. You will be rewarded by observing many more birds in your yard. The birdbath itself should be one that can tolerate cold weather and ice without cracking. Therefore, we store our pretty birdbath away over winter and use our old one instead. After all, survival is not a beauty contest.

There are four requirements to attract wildlife to a garden: food, water, shelter, and a place to raise their young. Over the past few years we have added quite a few native plants to our garden. Some of them surround our small pond, making it not only a focal point in our backyard, but also a prime stopover location for migratory birds. Even though we have a bird bath, many birds seem to prefer running water to quench their thirst.
During the past few weeks we have spotted the following visitors in our garden: a male scarlet tanager, a Tennessee warbler, an immature male Cape May warbler, two yellow-rumped warblers, and probably a first-year white-crowned sparrow. 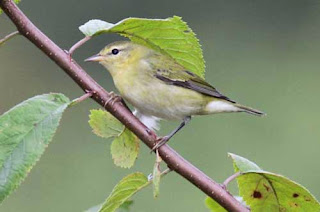 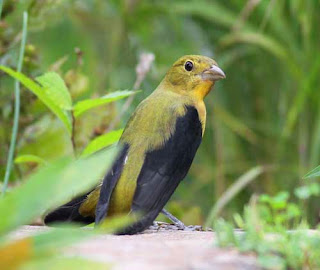 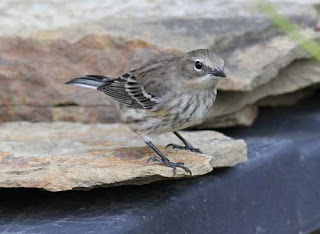 By adding water – be it a fountain or mister – you too might view some exciting migratory birds in your yard.

This summer has been wetter than usual, at least until August arrived. Luckily, a native garden can cope with all kinds of weather conditions. And for dry spells we have a rain barrel that provides free water.
Every year we observe new kinds of insects in our certified wildlife habitat and we never cease to admire them. Needless to say, I find many photo objects in my own backyard. Bees – especially bumble bees – are drawn to purple coneflowers, common milkweed, Joe-pye weed, and blazing star. 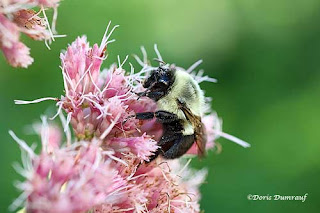 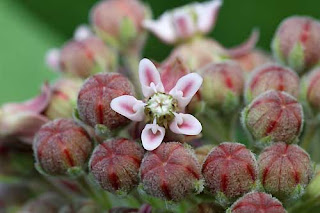 Unfortunately, the milkweed did not attract any monarch butterflies this year. We had noticed fewer monarchs last year, but seeing not one of them this year is very distressing.
I plant few annuals, but have always had beautiful zinnias in our flower bed. This year, however, it has been a war of rabbits vs. me, and I’m afraid the rabbits won. I even put down a fence wrapped with landscape cloth, but it was no use. The salvias I planted in their stead are beautiful. I plan on planting them again next year. 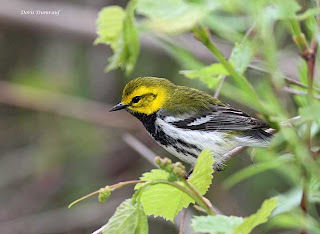 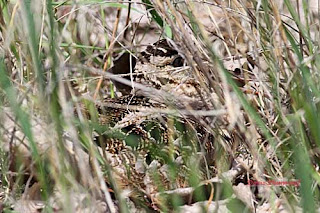 American woodcock
We recently visited Magee Marsh in Ohio during the height of the warbler migration season. Warblers, however, are not the only birds you can see and hear in the marshes. I believe it should be called the red-winged blackbird capitol of the world because I have never seen so many blackbirds in my life. Their calls surrounded us from all directions. All in all, we spotted these birds at Magee and the Ottawa National Wildlife Reserve:
Red-winged blackbirds, great blue herons, great egrets, tree swallows, barn swallows, purple martins, yellow warblers, warbling vireos, palm warbler, black duck, common grackles, yellow-rumped warbler, black-throated green warbler, downy woodpecker, scarlet tanager, Baltimore oriole, common nighthawk, American woodcock, bay-breasted warbler, black-throated blue warbler, white-crowned sparrow, American robin, northern cardinal, trumpeter swan, bald eagles. Another awesome sighting was a huge snapping turtle on the wood floor making its way to the water.
The weather was gorgeous. I did not get to shoot as many photos as I liked since the warblers were often high in the trees, but I had a great time sighting the birds. Birders are most helpful pointing out birds that we would not have spotted on our own. Thank you all!
﻿
http://dorisdumrauf.com/wp-content/uploads/2013/04/avatarblank-240x300.jpg 0 0 admin http://dorisdumrauf.com/wp-content/uploads/2013/04/avatarblank-240x300.jpg admin2013-05-24 14:20:002013-05-24 14:20:00Birding at Magee Marsh 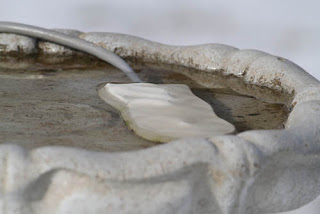 Bird baths and other water features attract many birds to a yard. We all know that water is essential for all creatures during the heat of summer, but birds also need water in winter. Keeping a bird bath ice-free is a challenge, so a couple of years ago we purchased a bird bath heater. It is a big draw. One frigid day recently, I spotted a squirrel (nothing keeps them away from yards), a Northern cardinal, and a Caroline wren drinking from the bird bath in quick succession.
Naturally, you’ll need to check the water level regularly to make sure it doesn’t dry out. It is also necessary to clean it on a regular basis. If this sounds like a lot of trouble, it is. But you’ll have the satisfaction of knowing that you are helping birds survive. 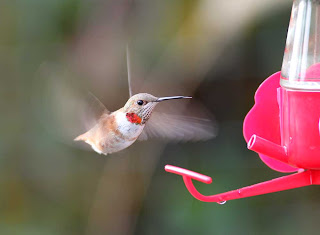 Last week I learned that a rufous hummingbird was banded on Mt Washington in Pittsburgh. I had never even seen a rufous hummingbird in the summer, let alone at the end of November. The homeowner was more than happy to accommodate me when I asked if I could photograph the hummer. I could hear its wings buzzing before I even sighted it. It was an amazing experience and I hope it will return next summer – that is, if it ever leaves for the winter! 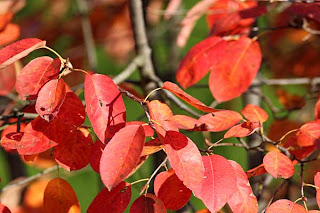 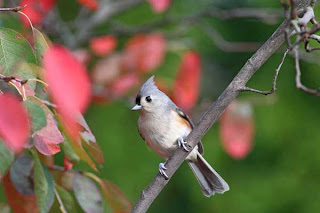 When we purchased our serviceberry (Amelanchier canadensis), we bought it especially because of its awesome fall foliage. It did not disappoint, as the images I took recently attest.
The serviceberry is also called shadbush or Juneberry. In spring we admire its delicate white flowers, which soon turn into tasty red berries (just ask cedar waxwings or robins). It puts on its biggest show in October when its leaves turn into a bright red burst of color.
Unfortunately, superstorm Sandy knocked many of the leaves from its branches. But we know that next year, we will enjoy our serviceberry all over again. 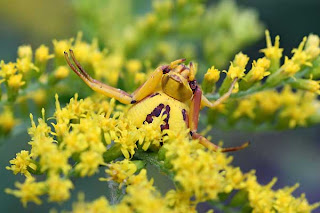