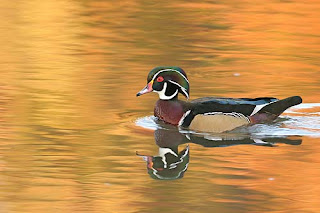 I spent the weekend at North Chagrin Reservation in Ohio where I attended a wood duck photo workshop. I arrived on Friday afternoon in a light rain and checked out the pond. To my surprise the birds were so tame that even the great blue heron I saw did not fly away when I approached. Apparently, the waterfowl and shorebirds are so used to people that they don’t get spooked.
On Saturday morning, we joined plenty of other photographers on the boardwalk to photograph wood ducks and mallards in the early light. We learned that about ten years ago, wood ducks began to breed in the nest boxes that had been built for them. More nest boxes followed and the reservation now is home to a beautiful flock of wood ducks. Before migrating south in early November they have molted into their fresh plumage. Against the backdrop of fall foliage reflecting in the ponds they are truly beautiful. Mallards and Canada geese were also plentiful. And the trees around the ponds and on the trails are home to many songbirds. Although the workshop ended on Sunday evening, I spent Monday morning at the pond before I packed up and it began to rain. It has been a cold, breezy weekend but at least the rain held off until I was finished. The fall foliage, which was probably at or near its peak in Cleveland, added to the beauty of the experience. Now I am back in our warm house, tired and excited about the happy task of editing hundreds of photos. I think I have found another favorite spot to visit.