On our third day in Florida, we headed to Sanibel Island to visit J.N. “Ding” Darling National Wildlife Refuge. We had hardly entered the refuge when we spotted a tricolored heron and a white ibis nearby. The day was hot and it was tempting to stay in the shade. Unfortunately, the shade also harbored tiny black insects that attacked my arms relentlessly. Oblivious to insect repellant, they drove me into the sunshine. That was the only low point during an otherwise amazing drive. 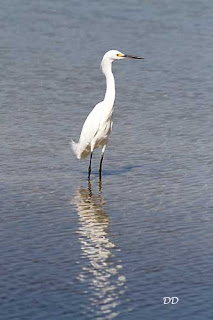 One overlook was especially fruitful, as we observed a large group of white pelicans on a sandbank, snowy egret, hooded and red-breasted mergansers, plovers, ring-billed gull, and cormorants. Fish were jumping out of the water and crabs moved on the bottom. 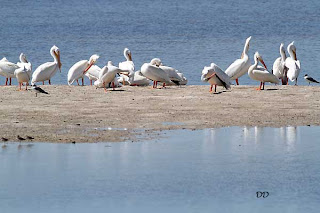 After a couple of hours, we realized that we had only covered a quarter of the wildlife drive. We then increased our pace and stopped less frequently. Before leaving the refuge, we spotted an immature alligator and, most excitingly, an osprey nest quite close to the road. 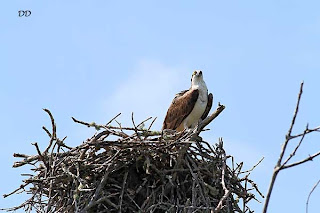